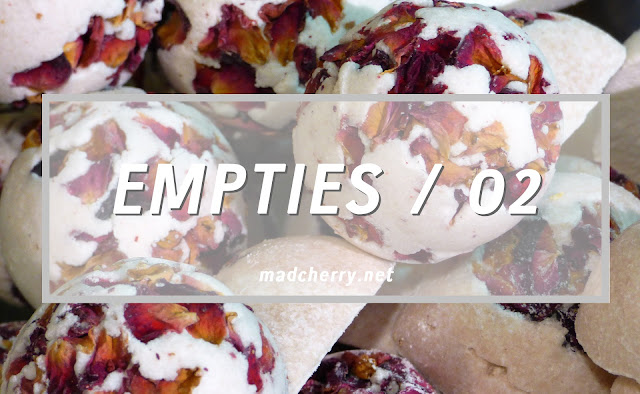 It’s been a hot minute since my last empties post, but I didn’t really take that long to finish these products. I just waited ’till I had a few items to write about.

Anyway, let’s get on to the mini-reviews.

Garnier Milky Lightening Dew Toner
I bought this in hopes that it would help in diminishing some of my acne scars. I loved using it at first because it was really hydrating. It was novel to me since all the toners I used in the past seemed to suck out all the moisture from my skin. It did nothing for my spots, though. And when I finished using it up, I stopped getting breakouts. I still do get a pimple or two or three whenever that time of the month comes, though. But this toner apparently broke me out, so I’m definitely not getting another bottle.


Myra-E Daily Moisturizer
I know I should branch out and try new things, but I really like this moisturizer for daytime. It’s lightweight. It does the job. And it’s affordable. But since I’ve promised myself that I would pay more attention to my skin starting this year, I’ll be scouting for a better moisturizer.

Human Nature Sunflower Oil
I’ve tried this before but it went rancid really quick, so I wasn’t able to use it much. This time, though, I finished up the bottle. But I still don’t know how I feel about it. I bought it to use before bed, in conjunction with my moisturizer. It was great at hydrating my skin, but it gave me tiny bumps. So, I discontinued using it on my face and started using it elsewhere. I read a lot of reviews saying it’s good at lightening the armpits, so I gave it a go in that area. I didn’t notice a big difference, partly because there were days when I forgot to use it. But during the time that I managed to put it on, my underarms felt smoother than they normally are. I also tried using this for my hair but I didn’t really notice a difference.

So, am I gonna pick another bottle up? Probably. I refuse to believe that this doesn’t do what it claims because I’m all about supporting Filipino and organic brands and this happens to fall under both categories. But I don’t know, maybe I’m fooling myself. Maybe I’ll change my mind. We’ll see.

Nichido Eyebrow Pencil
So, I didn’t exactly empty it because it doesn’t have a container. But it still counts! What I liked most about the pencil is its color. It’s a bit creamy for my liking. I prefer brow products that have just the right amount of waxy and creamy. I won’t re-purchase because I’m actually thinking of venturing out of the drugstore. I still won’t cross the high-end mark, though. I’m much too kuripot (thrifty) for that.

Have you tried these products before? How did they work for you? What products have you used up?

Liked this? Share it with friends!
Tags:Beauty Review
previousOn Loving Your Body And… Well, Kim Kardashian
nextIt’s a Bit TMI but Here Are the Beauty Stuff I Do When I’m on My Period